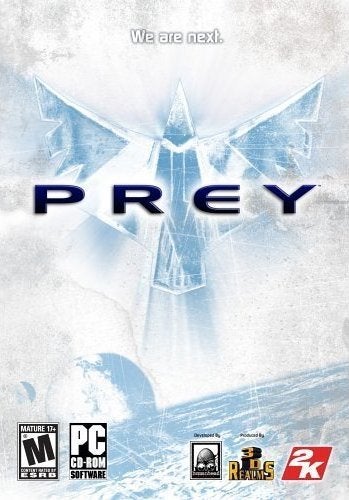 Prey tells the story of Tommy, a Cherokee garage mechanic stuck on a reservation going nowhere. Abducted along with his people to a menacing mothership orbiting Earth, he sets out to save himself and his girlfriend and eventually his planet. In Prey, players enter a living spaceship which enslaves alien races and devours humans for lunch. A unique twist on the first person shooter genre, Prey features such innovations as the ability to walk on walls, manipulate gravity and perform a "spirit walk" by leaving your physical body behind. Designed by Human Head (under the direction of 3D Realms), Prey features full online support for up to eight players, utilizing the game's play innovations for unique multiplayer experiences. Features: - Built on an enhanced Doom 3 engine, the most impressive 3D engine used in a released game. - Portal technology adds a new dimension to gameplay, allowing enemies to appear out of thin air and create new and completely original puzzles and gameplay styles. - Several never-before-seen gameplay elements such as Spirit Walking, Wall Walking, and Deathwalk. Highly organic, living environment that itself can attack Tommy. - Tommy's sidekick, a spiritual hawk, can help him fight enemies and decipher the alien language of the living ship. - Multiplayer game support that takes advantage of the unique gameplay styles in Prey.