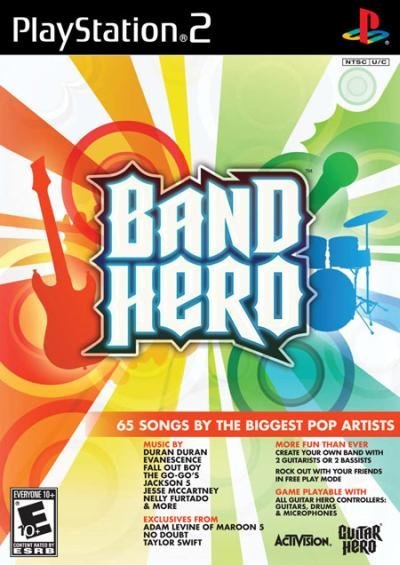 Brought to you by the makers of Guitar Hero, one of the best-selling video game franchises of all time, Band Hero features the hottest chart-topping hits from everyone's favorite bands including No Doubt, Nelly Furtado, Lily Allen, The All-American Rejects and Jackson 5. Headlined by some of the leading names in music as in-game artists and playable characters, including singer, songwriter and guitarist Taylor Swift and Maroon 5 frontman Adam Levine, Band Hero is the ultimate party game where friends and family can choose to join the band or "take five" at any time without interrupting the performance, in Party Play mode. Band Hero allows fans to create the band of their dreams, using any combination of vocals and guitar or drum controllers, providing budding pop stars the chance to customize how they interact with and experience their favorite music. This bundle of Band Hero comes packed with everything you need to create your own family band. Included in the box are a Guitar Hero drum and guitar controllers as well as a Guitar Hero microphone. Features: - Rock to the Beat -- Band Hero includes the most fun music that brings friends and family of all ages together to sing, play guitar, or drum to a wide variety of today’s chart topping hits and most recognizable anthems. The game features an explosive on-disc set list of more than 65 tracks from the hottest new bands and classic artists, including Maroon 5, Jesse McCartney, The Go-Go’s, The Turtles and Janet Jackson. - Let’s Get this Party Started! -- Novice and expert players alike will find it easier than ever to jump in and jam out with friends and family thanks to Band Hero’s Party Play mode. Party Play inserts players straight into the action from the start-up menu with the press of a button allowing them to join in, drop out, or switch personal options at any time without fear of failing the song or interrupting the jam session.