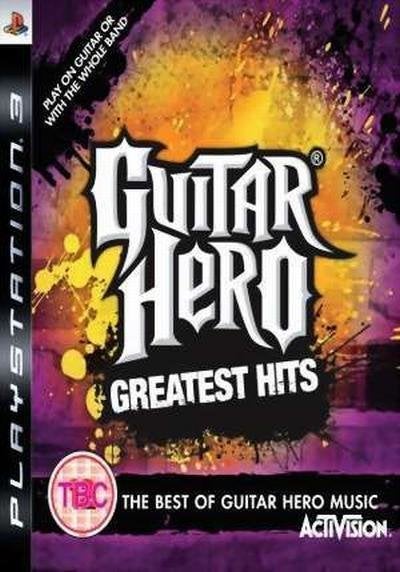 Turn down the lights, crank up the amps and prepare to command center stage as some of the most famous AND infamous tracks from Guitar Hero, Guitar Hero II, Guitar Hero Encore: Rocks the 80s and Guitar Hero III: Legends of Rock step into the spotlight in the most epic, full band jam session to-date -- Guitar Hero Greatest Hits. The #1 best-selling video game franchise of 2008 presents the best of the best to music video game aficionados so they can join together with guitar, bass, drums and vocals and rock to master tracks of their favorite Guitar Hero music. Featuring 48 master recordings, Guitar Hero Greatest Hits delivers exciting online and offline gameplay modes including Band Career and 8-player "Battle of the Bands," which allows two full bands to compete head-to-head online. In Guitar Hero Greatest Hits players' rock n' roll fantasies turn to realities as they create their rocker, compose their music and share it with the world through the innovative Music Studio, GHTunesSM and robust Rock Star Creator gameplay modes first introduced in Guitar Hero World Tour. Features: - Guitar Hero's Greatest Hits -- Play alone or as a full band and rock out to 48 of some of the hottest fan-favorite tracks from Guitar Hero's original guitar-centric games: Guitar Hero, Guitar Hero II, Guitar Hero Encore: Rocks the 80s and Guitar Hero III: Legends of Rock - I'm With the Band -- Video game fanatics can expand to full band and for the first time ever strum, drum and belt out some of their favorite Guitar Hero songs as master tracks on all gaming systems as they jam along to updated note tracks and all-new gameplay for the drum controller and microphone - Discover the Spirit of Rock, All Around the World -- Rock through fantastic locations with Guitar Hero favorites and play at eight new venues based on wonders of the world, including the Amazon, Polar Ice Caps and the Grand Canyon