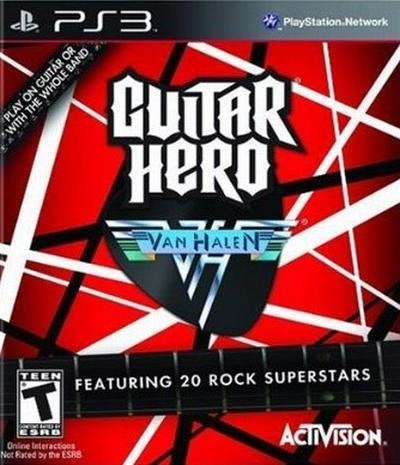 Guitar Hero Van Halen brings to life the flamboyance, virtuosity and unadulterated fun that has made Van Halen one of the most successful and popular rock and roll acts of any era. Along with 19 larger than life musical artists, including Queens of the Stone Age, Weezer, The Offspring, Blink-182 and Queen, guitar legend Eddie Van Halen, famous frontman David Lee Roth, dynamic drummer Alex Van Halen and skilled songwriter and bassist, Wolfgang Van Halen, give fans the chance to own the stage and put on show-stopping performances in the coolest, all-new venues from around the world. With over 25 of Van Halen's greatest hits from "Jump" to "Panama," the set list crafted for Guitar Hero Van Halen is the perfect combination of high-energy rock that will appeal to a wide range of fans. Features: - In the Spotlight with Rock Legends – Guitar Hero Van Halen brings the Rock and Roll Hall of Fame inductees to life, delivering players a unique way to experience the energy, attitude and music from one the most accomplished bands in the world. - I Want it All and I Want it Now – With rockin’ anthems from a host of globally renowned artists spanning various genres of music – including Lenny Kravitz, Weezer, Foreigner, Queen and Blink-182 – coupled with 25 of Van Halen’s greatest hits from “Jump” to “Panama” and three of Eddie Van Halen’s most epic guitar solos – the set list crafted for Guitar Hero Van Halen is the perfect combination of fret rippin’ riffs, party pumpin’ jams and block rockin’ beats. - We Built This City on Rock and Roll – With tracks ranging from the immensely fun Foo Fighters’ “Best of You” to music showcasing the technical expertise of Van Halen’s “Eruption,” the easy to play, yet difficult to master gameplay that living room legends have grown to love makes a triumphant encore in Guitar Hero Van Halen.