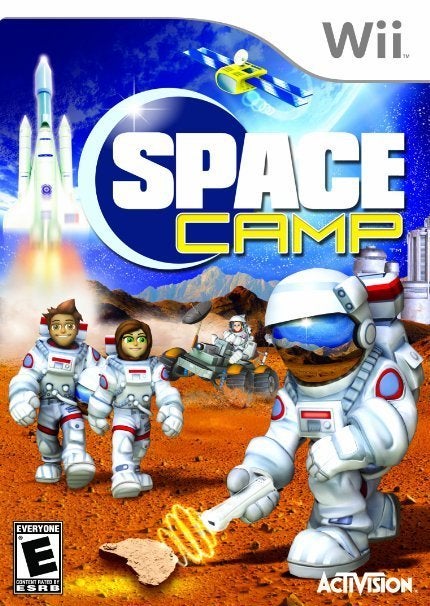 Congratulations new recruit. You are going to Space Camp. A joint venture between video game publisher Activision and the US Space and Rocket Center in Alabama, which operates the real-life space camp and aviation challenge program which has graduated over 530,000 students in its 27 year history, Space Camp for Nintendo DS is a single player adventure where players receive the training and tools to become an astronaut. In Space Camp players experience training similar to what a real astronaut goes through, like weightlessness in a training pool, developing navigation skills in the training simulator and more. You will need to pay attention because in this adventure you'll need every one of your newly acquired skills, when during a training session, you get rocketed to the moon. Once there your training will be put to the test as you take on a series of challenging missions in order to return to Earth. With your faithful robot sidekick ARP, you need to maneuver through a daring lunar journey, work on the half-completed Moon Base, scour the lunar surface for elements and secrets, refuel your ship and even defend the moon itself against alien invaders. A hero's welcome awaits you back on Earth, but can you make it back? Key Features: - Your Robot Buddy ARP – The game features a secondary AI character in the form of a small robot named ARP that follows the main character around, interfaces at certain times and gives hints on what to do next if the player gets stuck. - Character Customization – Players are able to select from a boy or a girl character and pick his or her skin tone. As the game progresses, players earn (or find) new space suit pieces and other clothing, allowing the character’s appearance to be constantly updated during the adventure.