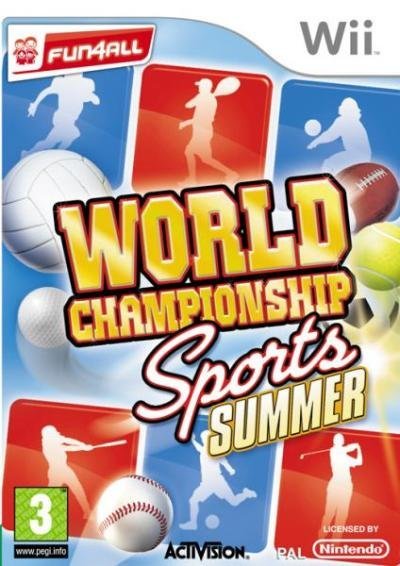 World Championship Sports for Wii offers instant access to the most action-packed moments in sports. The result is a title with a singular focus on putting players in the most thrilling situations while competing in their favorite sports. Six sports are represented for a combined total of 22 events, each using instinctive controls that mimic real athletic movement with the Wii Remote. Each sport -- tennis, basketball, football, soccer, lacrosse and hockey -- has its own kind of "hit the shot at the buzzer" style of heart-pounding action, and this is exactly what Big League Sports captures. World Championship Sports on Nintendo Wii: Features: - Allows up to four players to compete in a variety of modes, including single game, marathon and tournament modes. - Players can view their statistics and overall progress, as well as the trophies they have won. - A character creation feature allows players to craft a character to their liking with dozens of customization options. Play 6 of Summer's Hottest Sports: - Beach Volleyball - Tennis - Baseball - American Football - Football - Golf