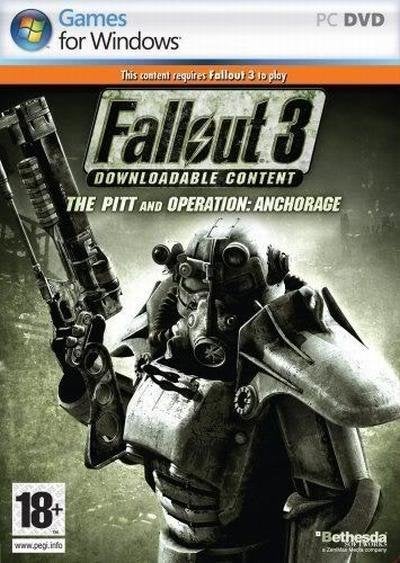 The Pitt Description: The Pitt allows you to travel to the post-apocalyptic remains of Pittsburgh, Pennsylvania and become embroiled in a conflict between slaves and their Raider masters. Explore a sprawling settlement ravaged by time, neglect, nuclear radiation, and moral degradation. The Pitt is filled with morally grey choices, shady NPCs, new enemies, new weapons, and much more. Story: Operation Anchorage Description: Enter a military simulation and fight in one of the greatest battles of the Fallout universe - the liberation of Anchorage, Alaska from its Chinese Communist invaders. Gain access to unique armor, weapons, and exotic gadgets while you build and command interactive Strike Teams to win the battle and defeat the Chinese base. Story: The Brotherhood Outcasts are trying to acquire advanced military technology, and the only way to open the vault containing these relics is by completing a tactical simulation only you can enter. In Operation: Anchorage you will re-live the epic Battle of Anchorage from Fallout lore. Find your way into the simulation, stripped of resources, and survive within the rules set up by the simulation’s creators. The Chinese red army is everywhere, so secure the surrounding mountain side and fight your way into the Chinese base. Features: - Requires Fallout 3 - Adds hours of extended gameplay to explore the Alaskan tundra with a new or existing character - Discover new side quests and subtle plot elements and determine your path in this place where nothing is "right" or "wrong" - Gain access to new weapons, exotic armor, and items... like the AutoAxe and Chinese Stealth Suit