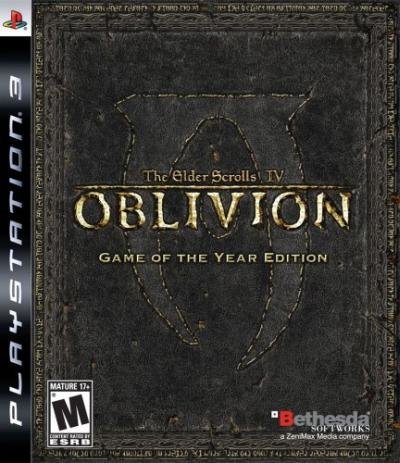 Oblivion GotY allows players who have never played the 2006 Game of the Year to experience Oblivion for the first time with additional content. In addition, gamers can continue their existing games of Oblivion and experience the new quests and areas offered by the expansion and downloadable content. Oblivion GotY includes the original version of the award-winning RPG Oblivion along with the official expansion, The Elder Scrolls IV: Shivering Isles, and the downloadable content, Knights of the Nine. General Features: - Create and play any character you can imagine, from the noble warrior to the sinister assassin to the wizened sorcerer - An all-new combat and magic system brings first person role-playing to a new level of intensity where you feel every blow - This groundbreaking AI system gives Oblivion's characters full 24/7 schedules and the ability to make their own choices based on the world aroundthem. Non-player characters eat, sleep, and complete goals all on their own - In the Shivering Isles expansion, see a world created in Sheogorath’s own image, one divided between Mania and Dementia and unlike anything you’ve experienced in Oblivion - Battle the denizens of Shivering Isles, a land filled with hideous insects, Flesh Atronachs, skeletal Shambles, amphibeous Grummites, and many more - The Knights of the Nine have long been disbanded. Reclaim their former glory as you traverse the far reaches of Cyrodill across an epic quest line