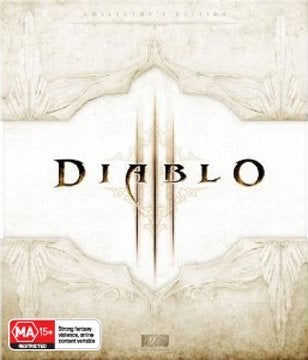 The Diablo III Collector's Edition includes: A fallen star burns across the sky, signaling the rebirth of a long-forgotten evil, and calling mortal heroes to arms once more. This limited edition collector's set commemorates your return to the darkened world of Sanctuary. Inside, you'll find a treasure trove of rare and legendary items to aid you in your apocalyptic battles at the End of Days. BEHIND THE SCENES DVD AND BLU-RAY TWO-DISC SET - Meet the teams behind the creation of Diablo III with this exclusive Blu-ray/DVD two-disc set. Enjoy over an hour of interviews detailing how the world of Sanctuary came together from the combined efforts of artists, writers, programmers, designers, musicians and animators. COLLECTOR'S EDITION SOUNDTRACK - Experience twenty four original pieces from the Diablo III soundtrack on CD and deepen your music collection with a sound as timeless as the Eternal Conflict itself. THE ART OF diablo iii - Delve into the game's stunning artistic development with this 208-page art book, which catalogues countless pieces, from early concepts to final 3D renderings. Diablo® iii PC/MAC GAME - The full version of the Diablo III game on DVD-ROM. EXCLUSIVE in-game content: DIABLO III AESTHETIC ARTIFACTS - Call forth glowing angel wings, unfurl an exclusive banner, and dye your armor sets with the Bottled Cloud or Bottled Smoke items. WORLD OF WARCRAFT PET FETISH SHAMAN - Journey throughout the World of Warcraft with the fetish shaman at your side. STARCRAFT II BATTLE.NET PORTRAITS - Display your status as a hero of the mortal realms with an exclusive army decal and three Diablo-themed Battle.net portraits. DIABLO SKULL AND 4GB USB SOULSTONE - Shackle your PC into unholy slavery with this 4GB USB soulstone and Diablo skull base. The USB also includes full versions of Diablo II and Diablo II: Lord of Destruction so you can retrace the sinister path of the Dark Wanderer once more.