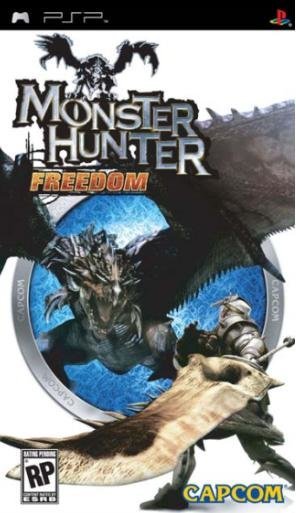 A portable version of the creature-hunting game by Capcom's Resident Evil Outbreak creators. In Monster Hunter Freedom, challengers take on a variety of quests and conquer larger than life beasts either alone or with the aid of others. Building upon Monster Hunter and Monster Hunter G (both on PS2), Monster Hunter Freedom includes new missions, additional features and content adapted for the PSP system. Adventurers are now free to take their epic battles with them wherever they go, as they explore a unique world inhabited by ferocious monsters and become mighty hunters in this exciting action game. With a multitude of missions, quests, characters, weapons and more, the variety is virtually limitless. The game features both enhanced single player campaigns as well as multiplayer missions via the PSP system's ad hoc mode which allows up to four friends to band together for intense battles. Features: - Lush environments and detailed monsters are beautifully represented on the PSP system - Modified quests enhance offline gameplay – whereas the previous titles emphasized online gameplay, missions have been adjusted to offer more accessible single player experiences - Up to four can team up in cooperative multiplayer missions via the PSP system's ad hoc mode. Players can also exchange certain items as well as guild cards which track points that are awarded when friends play together/ - Enhanced village hub features a new look and includes various upgraded areas, including an expanded Item Shop, a House area where hunters can store and manage items in a chest and read magazines that provide useful game tips, a new Farm where players can fish, garden, scavenge for items, and other new areas as the game grows. - New Felyne Kitchen – hire these feisty creatures to create various culinary delights in their extraordinary kitchen. Experience different effects from eating the specially prepared food such as increased attack power, defense and more.