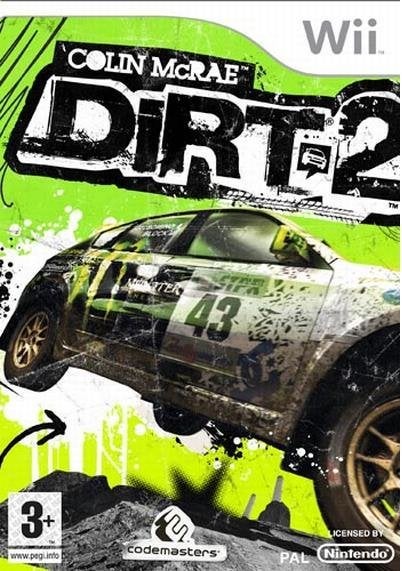 DiRT 2 on Wii shares the action-sports attitude of its high-definition cousins and takes players on a World Tour from Iceland to Japan, LA to London and beyond. Designed from the ground up exclusively for the Wii Platform, DiRT 2 supports all major controller systems, including the Logitech Wii wheel, and allows up to four friends and family to play together in split-screen, perfect for party race gaming. Featuring a killer line up of officially licensed rally and off-road vehicles, players take on a range of different disciplines set over 40 events at nine global locations including Rally, Raid, and Rallycross. Features: - Taking the very best of real-world off-road racing as its inspiration, DiRT 2 mixes adrenaline-charged, contemporary action-sports event atmosphere with sublime racing to deliver a stunning arcade experience on Wii - DiRT 2 will take players on a World Tour to compete in over 40 exhilarating events set in diverse and challenging real-world environments. From arena events set at the iconic Battersea power station in London and races set in exotic locations like Iceland, Japan and Ethiopia, the world becomes the player's off-road playground - Players get behind the wheel of best-in-breed vehicles like the Subaru Impreza WRX STi, Nissan 350z, Hummer H3 to experience the most rewarding and thrilling off-road racing on Wii - Conquer traditional game modes and new challenges. DiRT 2's extensive career mode include both circuit and point to point racing, and is complimented by an arcade mode for instant race thrills and a challenge mode featuring 20 trials, where players are rewarded for performing jumps, power sliding and high speed runs