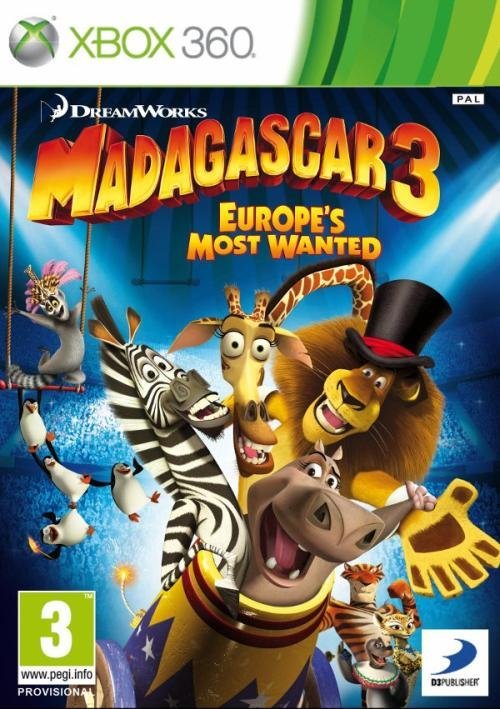 Based on DreamWorks Animation's new upcoming animated film, Madagascar 3: Europe's Most Wanted puts players in the role of their favorite Madagascar characters, including Alex the Lion, Marty the Zebra, Melman the Giraffe, and Gloria the Hippo. In a new and original adventure, the gang travel through Europe by way of a travelling circus and must put on the show of their lives if they ever want to make their way home to New York. Players will be able to experience the excitement of the circus by completing challenging and sometimes suspiciously zany missions given by the Penguins, performing amazing publicity stunts on some of Europe's most notable landmarks, and dazzling the crowd with circus acts fit only for a Madagascar-style Circus Extravaganza! All the Madagascar friends are along for the ride in this comedic circus adventure including King Julien, Maurice and Mort, the chimps Phil and Mason, the Penguins, plus their new circus pals Stefano the sea lion, Vitaly the Siberian tiger and Gia the jaguar. Features: - Play as your favorite Madagascar character: Play in the role of your favorite Madagascar characters including Alex the Lion, Marty the Zebra, Melman the Giraffe, and Gloria the Hippo in an all new wild circus adventure through iconic European locales from the movie and beyond - Capture the excitement of the circus: Steal the show and capture the thrill of the circus in a unique combination of action and adventure that will dazzle players with a spectacular array of skillful acrobatic and jaw-dropping abilities - Experience brand new adventures: Players will jump, swing, kick, smash, swim, roar, sprint, and steal the show in multiple challenges that include exploring some of Europe's most popular locations, performing wild circus stunts, and engaging in multiple circus parties - Multi-player fun: Experience the world of Madagascar with friends and family in drop-in and out two-person multiplayer