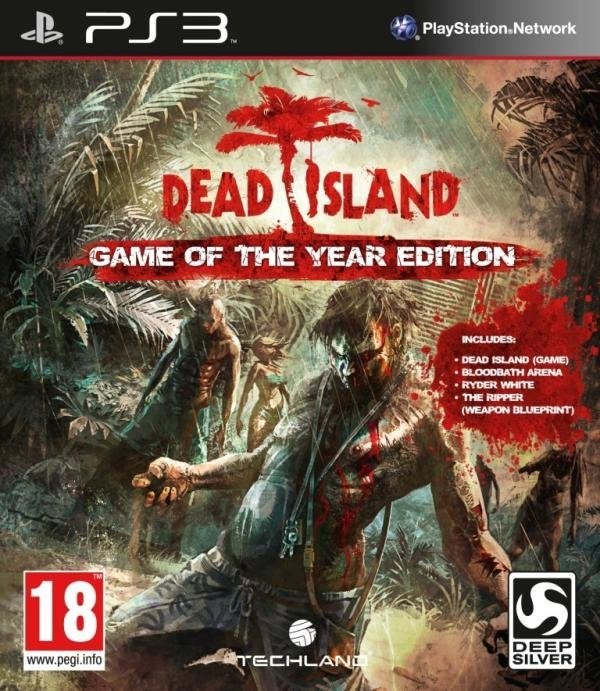 Dead Island: Game of the Year Edition includes: - The original Dead Island game with all its updated patches - The Ripper: A deadly combination of baseball bat and buzz saw that leaves attacking Zombies battered and bleeding - Bloodbath Arena: Enter the arena and take on endless waves of zombies. Loot XP and items and take them into the main game. - Ryder White: Play though the adventure as Ryder White and learn more about the mystery behind Dead Island It's time to return to paradise... Dead Island: Game Of The Year Edition combines the classic zombie survival with all the DLC for the ultimate Dead Island adventure to date! Ryder White: This story line offers a new unique perspective into the incidents in the main story of Dead Island. This time the player will get the chance to play as Ryder White, the antagonist of the main game; learn more about his motivations and why, from his point of view, he did what he had to do. This fresh take on the Dead Island story shows Ryder White both as a military man and a loving husband. The story stars Ryder White as a newly playable character and offers a single player campaign with several hours of story content with twists and turns that will shed new light on the happenings in the main game. Two blueprints and weapons will further expand the already impressive arsenal of Dead Island. Bloodbath Arena: In "Bloodbath Arena" four different arenas offer new challenges that can be played alone or in coop mode. It's a desperate fight for survival where waves after waves of unrelenting zombies attack, one more gruesome than the next! In "Bloodbath Arena" characters can loot experience points and items and bring them over to the campaign mode. Players can show off their skills in zombie fighting with the newly implemented leaderboards.