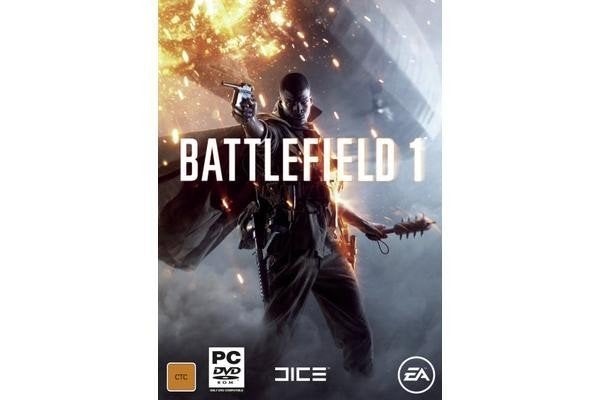 Battlefield's tried and tested multiplayer feels wonderfully at home in the WW1 setting, and the solo campaign tells interesting - if historically lightweight - stories.

Pre-order Battlefield 1 and get the Battlefield 1 Hellfighter Pack and 7 days early access to a map released later in 2016. The Harlem Hellfighters was one of the toughest infantry regiments in the Great War. This pack contains unique unlocks inspired by their heroic deeds. Hellfighter Trench Shotgun – Combat battered shotgun, etched with the Hellfighter insignia and “Men of Bronze” on the receiver and the unit number 369th on the barrel, along with the carving “Go Forward or Die France 1918” on the wooden stock. Hellfighter M1911 – Reliable and timeless sidearm still used in action today affectionately called “old slabsides”, etched with the Hellfighter insignia on the breech and “Men of Bronze” on the muzzle. Hellfighter Bolo Knife – Fearsome blade etched with the Hellfighter regiment number 369th that makes your enemy feel homesick at first sight. Hellfighter Insignia – Wear this emblem to show your belonging to the elite Hellfighter unit and instill fear on the Battlefield. Experience the dawn of all-out war in Battlefield 1. Fight your way through epic battles ranging from tight urban combat in a besieged French city to the heavily defended mountain forts in the Italian Alps or frantic combats in the deserts of Arabia. Discover a new world at war through an adventure-filled campaign, or join in epic multiplayer battles with up to 64 players, and adapt your tactics to the earth-shattering environments and destruction. Fight as infantry or take control of amazing vehicles on land, air and sea, from the tanks and bikes on the ground, to biplanes and gigantic battleships, and adapt your gameplay to the most dynamic battles in Battlefield history. Epic 64-Player Multiplayer Battles – Squad up with your friends and join in the most epic multiplayer battles in FPS history with up to 64 players fighting as infantry or piloting vehicles ranging from tanks and bikes on the ground to biplanes an