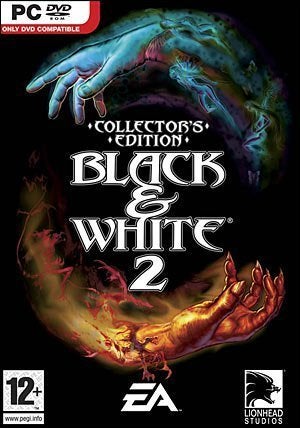 Sequel to Peter Molyneux's "god game." The world of Eden is now at war, immediately posing a question to the player. Will he go to war and conquer or try to uphold peace? Like its predecessor, Black & White 2 focuses on moral choices and uses an AI system that can support an almost infinite number of experiences and player persona. The breathtaking 3D world is more highly developed with new weapons, technology and smarter creatures who can learn strategies and master new abilities and skills. Black & White 2 also touts improved graphics and miracle effects, weather systems, the ability to to tap resources and disciples, and advanced city building and wall construction. Add to that the option to command huge armies and Black & White 2 promises to be an epic experience in every sense of the word. Features: - Wage massive wars, sieges and battles or use your skill and power to keep the peace; discover and use new Epic Miracles, including the ground-ripping Earthquake and volcanoes, which cause rivers of lava; choose and customize the Creature that's right for you from a selection, including old favorites as the Ape, Cow, and Lion, plus many others; research and create new forms of weaponry, from swords to bows to siege machines. Build and design unique defensive gates and walls; control and marshal huge and varied armies; create and control settlements that include housing, farming, and many other buildings like fountains and lush gardens (if you're Good) or stocks and guillotines; use multiple tools to help train and improve creatures. As well as using sticks, whips, and feathers, players can create their own unique tools; weather systems such as rain, snow, mists, and fog; journey through 10 lands homing each of the five tribes.