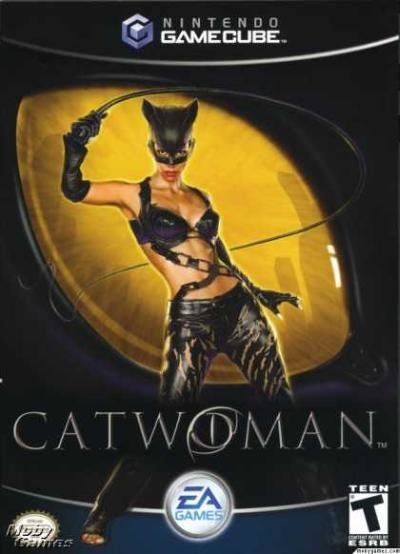 Boasting incredible acrobatic skills, the video game Catwoman can leap across roofs, run up walls, pounce on prey, utilize unique "cat senses," and avoid enemy bullets with feline grace. In addition, she can use her whip to swing through the air and utilize the fully interactive enviroments to trap or knock her foes unconscious. Catwoman is based upon the DC Comics character. The film and game follow the story of Patience Phillips played by Halle Berry, who is killed after she uncovers a dark secret held by her employers. Brought back to life by a rare Egyptian cat, she becomes Catwoman and sets out to discover the truth about herself and her murderer. The game will take players through numerous levels set in six different locations from the movie, including the jewelery store, the Hedare Factory, and Hedare's mansion and grounds. Gamers will encounter all the key characters from the movie, including three challenging bosses: Armando, Hedare's head bodyguard; Wesley, the evil and twisted Hedare henchman and Laurel Hedare, the beautiful face behind the cosmetics empire. Features: - The Power Of The Whip: Catwoman can use her whip to throw or topple objects; smash breakable items; trigger interactive objects remotely; climb, descend and swing from structures; and even rescue herself from incredible 'death fallsÓ in the rooftop levels. - Cat Senses: Players will view the world from a feline point of view and utilize unique cat attributes that allow Catwoman to change the odds to her advantage. These powers enable her to see in the dark (unlike her foes) and hunt her prey by seeing footprints and smelling trails that reveal where they have been and what they have done. Catwoman can also use her ÒSixth SenseÓ to establish threats around her and even predict what her enemy may do next. - Become A Wild Cat: Unleash Catwoman's "feral" side move faster, hit harder, and completely dominate her prey.