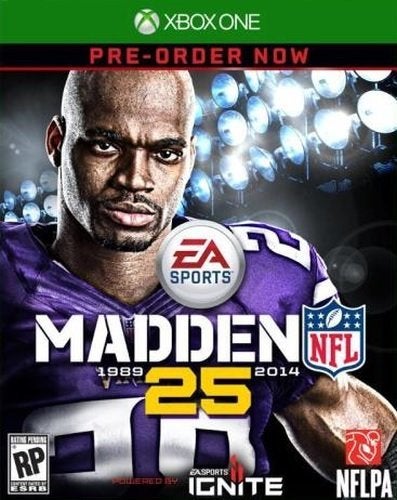 Madden NFL 25 celebrates the 25th anniversary of the Madden NFL series. Powered by EA Sports Ignite technology, Madden NFL 25 ushers in the next generation of sports games delivering 10x more detail and 2x the control. Players think and anticipate in the trenches and across the field. Every step is calculated to showcase the most realistic player movement ever, and the emotion of Sunday is brought to life like never before with living sidelines, rich commentary, and thunderous crowds. Madden NFL 25 changes the game forever. Features: - Next Definition Visuals -- • Madden NFL has never looked so real. See every nuance of a player’s face, equipment, and clothing as the line blurs between the players in the game and their real-life counterparts. Up to 4x the texture resolution breathes new life into stadiums, crowds, the field, and even the ball itself. Combined with high-fidelity animations that deliver the smoothest, most authentic looking player interactions ever, Madden NFL 25 delivers Next Definition visuals. - 2X The Control, Every Step is Calculated -- • All-new True Step player motion calculates every step, delivering unprecedented control. Players now have the ability to foot-plant, cut, and shift momentum in an authentic way, unlocking the agility and explosiveness of the NFL athlete. IGNITE run-time physics calculate at twice the rate allowing for the most organic, user-driven outcomes in franchise history. Combined with the precision modifier’s vast combination of ballcarrier moves, Madden has never felt this good. - Brains and Brawn -- All-new Player Sense unlocks the human element in Madden NFL. For the first time, players scan the field, anticipate situations before they happen, and maneuver with instincts and awareness.