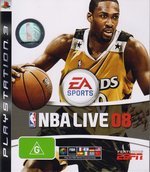 When the game is on the line and the ball is in your hands, what will you do? Will you penetrate, drive the lane and rise above the rim for a monster dunk, or find an opening on the perimeter and sink a game-winning three? Take control of the game with a full arsenal to win the one-on-one match-up from every spot on the floor with NBA Live 08. Taking a page out of NBA STREET Homecourt's book, NBA Live 08 introduces Quickstrike Ballhandling. This intuitive gameplay mechanic is mapped to the right analog stick and gives you the direct responsiveness you need to perform a full repertoire of ankle-breaking ball-handling moves that let you dominate on the perimeter. Pass the ball inside and win in the post with all-new 'own the paint' post play for the big men down low. Use the new shot-countershot control to string together combos of fakes and shots to fool your defender into committing and create space for the game-defining bucket. On the perimeter, in the paint, and with complete authenticity to the sport of basketball, dominate with your go-to move with NBA LIVE 08. All-New Quickstrike Ballhandling -- Whether you’re pushing the ball upcourt or backing down a defender inside, quicker, more responsive ball-handling moves allow you to break down opponents and take complete control of your game with the right analog stick. Every player has a go-to move that they consistently go to when the game is on the line. Now the signature go-to moves of the NBA’s best players have been realistically re-created to help you score when it counts. That patented step back jumper? A fadeaway with the big leg kick? If it's in the game, it's in the game. Compete in an eight team international tournament using authentic FIBA rosters and teams, including, the United States, Spain, France, and more or create your own online league with up to 32 teams and put your skills to the test.