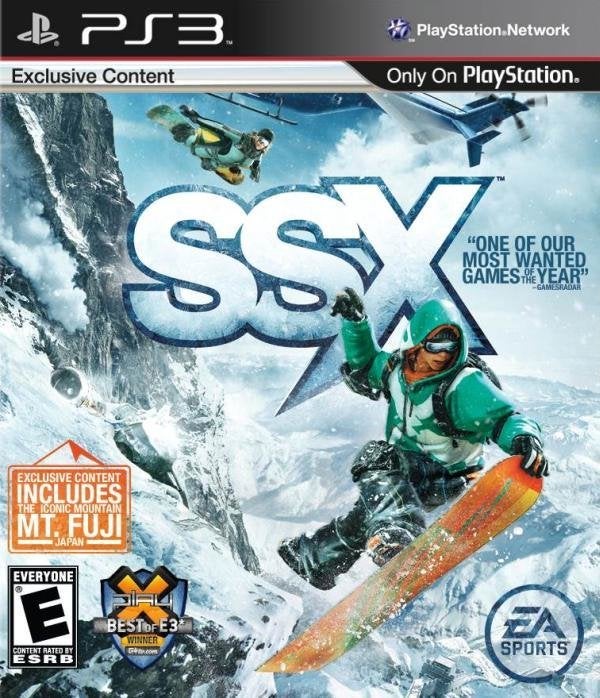 Released on 17/02/12. Subject To Change A modern day reinvention of one of the most critically acclaimed arcade franchises of all-time, EA SPORTS SSX will allow players to experience the franchises…
Read more

Released on 17/02/12. Subject To Change A modern day reinvention of one of the most critically acclaimed arcade franchises of all-time, EA SPORTS SSX will allow players to experience the franchises signature fun and adrenaline-packed gameplay across iconic mountain ranges all over the world. Utilizing NASA topographical satellite data, weve mapped out a Massive World for players to explore. Using a Google-Earth inspired interface, navigate throughout nine expansive mountain ranges and regions, each with multiple peaks and multiple drops. SSX packs reality-defying gameplay into every run letting players Race, Trick, and Survive down huge open mountains. In addition, Explore, Global Events and RiderNet - SSXs recommendation engine - headline an online feature set that will revolutionize social competition for gamers, making it fun and easy to compete with friends on your schedule. Conquer the Planets Mountains - From Antarctica to Africa and the Himalayas to the Alps, players will drop into nine of the most iconic mountains ranges and regions on planet earth. Using NASA topographical data and our proprietary Mountain Man tool, each of these iconic mountain ranges have then been exaggerated to deliver a gameplay experience that is true to SSX. Advanced Physics - Harnessing the power of the current generation of consoles, SSX introduces a revolutionary physics engine that will allow players to ride and trick off almost anything in the environment, unrestricted by invisible walls and barriers. Upgradeable Gear - From boards of varying speeds to wing suits that let you glide for longer distances, upgrade your gear to ride faster, trick higher and survive longer Characters Old and New - Favorite characters, as selected by the fans, make their return to SSX along with some new faces that will be joining the franchise. Characters include: Elise, Mac, Kaori, Psymon, Moby, Zoe,