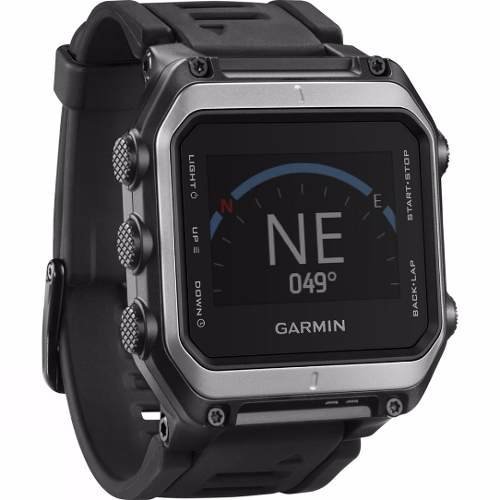 Get detailed GPS/GLONASS mapping and multi-sport tracking capabilities with the epix Watch from Garmin. The epix features a 1.4 color touchscreen display with fingertip pan/swipe access to device functions and all of its detailed maps, including the built-in worldwide shaded relief basemap, which simulates the shadow thrown upon a raised map area. The epix also includes a 1-year BirdsEye Satellite Imagery subscription, which enables you to transfer high-resolution satellite imagery to your device. This epix comes preloaded with Garmins Canada TOPO Maps: detailed digital topographic maps based on 1:250,000 and 1:50,000 scale National Topographic System data. Additionally, the epix is equipped with 8GB of built-in memory, so you can load up on additional maps and services, such as City Navigator and BlueChart g2.The epix features the same EXO antenna technology popularized in Garmins fenix 3. This stainless steel receiver is integrated into the epixs design and works as a powerful antenna for GPS and GLONASS satellite signals. It is designed to give you better satellite strength and quicker position fix than standalone GPS. Once your first signal fix is acquired, the epix provides a host of navigation features, such as advanced track recording, point-by-point routing, waypoint navigation, and more to help you find your way.In addition to its mapping and navigation functionality, the epix is also a full-featured training and fitness watch. You can use the epix as a step counter and activity tracker, a training device for running, cycling, and swimming, and to record data from your ski and snowboard runs. For advanced fitness data tracking, the epix is compatible with optional Garmin sensors, such as a heart rate monitor, speed/cadence sensor, and more.Because its an outdoor watch, the epix is designed to be rugged and durable. It features a mineral glass lens and PVD-coated surfaces, so the finish wont wear off and overall wear will be greatly reduced.