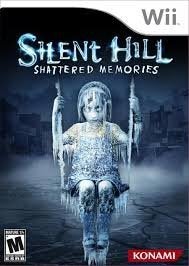 Harry Mason and his daughter Cheryl are heading to a small midwestern resort town. Suddenly, Harry sees a dark figure in the street and swerves to avoid it, causing a serious accident. After coming to, Harry realizes that he has smashed the car and Cheryl is missing. You must guide Harry through the strange town of Silent Hill town while he searches for his daughter Will Harry be able to save his daughter and escape the town in Silent Hill? Designed to make full use of the Wii's unique controllers, Silent Hill: Shattered Memories uses the Wii Remote as a torch and cell phone as Mason looks for clues. The torch is vital for scouring the darkened, abandoned buildings of Silent Hill, while the phone acts as a secondary user interface, allowing the player to access maps via its GPS capabilities and take pictures of interesting elements. Likewise, the Wii Remote also can be used to pick up, examine and manipulate items to solve puzzles along the journey. Such technology was not available when the original Silent Hill was released in 1999, and its inclusion showcases Konami's determination to enhance the playing experience with new, available technology. Features: - A re-imagining of the original Silent Hill that turns everything you thought you knew on its head - The game watches you and adapts to your actions to create a unique experience to each player and intensify their fears - Implementation of a cell phone as the user interface, which acts as a story telling device, map, puzzle helper, and camera that provides seamless flow with no interruption in gameplay - New nightmare sequence focus on escape and evasion rather than direct confrontation. - Silent Hill: Shattered Memories will feature an all-new soundtrack by acclaimed series composer Akira Yamaoka