Majesco Alvin and the Chipmunks The Squeakwal 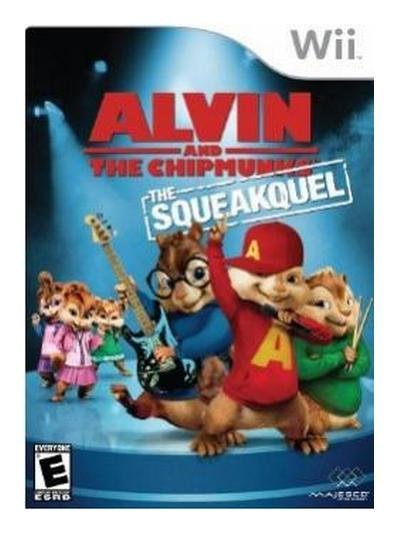 In Alvin and The Chipmunks: The Squeakquel, players can play as Alvin and The Chipmunks (Alvin, Simon, Theodore) or The Chipettes (Brittany, Jeanette, Eleanor). Musical sparks ignite as they jet around the world, rock the house in 25 concert locations on Wii and perform together in the ultimate concert finale. This game features award-winning songs from The Chipmunks' library along with hits from popular artists. Players can choose from a variety of gameplay modes -- including Multiplayer Mode and Jukebox Mode -- which allow them to compete with friends or play their favorite unlocked songs while watching music videos. Features: - Enjoy playing as your favorite loveable, but mischievous, singing groups from the cartoon series and movies in a unique storyline - Freedom to switch between unlocked locations with the associated music tracks which feature either The Chipmunks (Alvin, Simon, Theodore) or The Chipettes (Brittany, Jeannette, Eleanor), or a duet by both the bands, each with their own distinct personalities. - Prove you have rhythm and timing in the main game and in 3 micro-games utilizing the Wii remote and nunchuck - Features the Grammy Award and American Music Award winning songs from the Alvin and the Chipmunks library, each song's difficulty based on such things as tempo and complexity - Jet across the world and rock the house in 1 of 25 concert locations on the Wii in cities like New York, London and Sydney - 2 global modes of difficulty, Normal and Expert, are available for replay and can be changed anytime during your game - Multiplayer Party mode lets you play as your favorite Chipmunk or Chipette and compete locally with up to 2 friends on the Wii