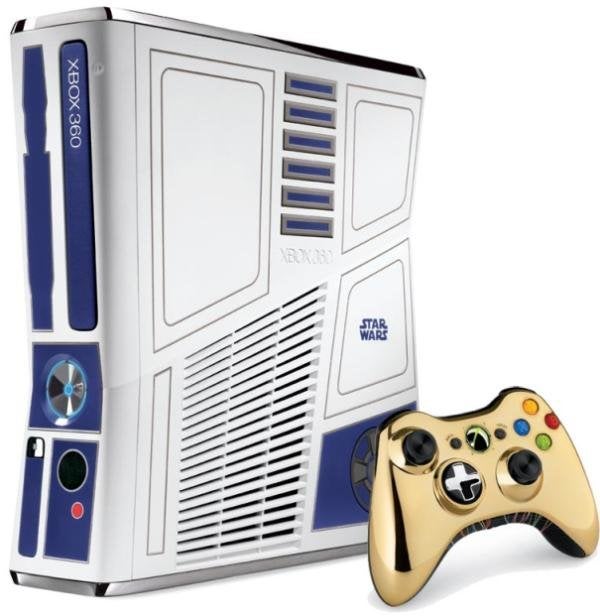 Get the Xbox 360 Limited Edition Kinect Star Wars bundle, with the Special Edition white Kinect Sensor and custom-designed console and controller based on popular Star Wars characters R2-D2 and C-3PO. Use the Force like a Jedi and immerse yourself in the Star Wars experience you’ve always dreamed of, in ways you never imagined possible. What you get: - Kinect Star Wars game: Enter the Star Wars universe, and use the Force like a Jedi, become a champion Pod Racer, pilot iconic ships and much more. - Xbox 360 Console: Bring the Star Wars characters you know and love into your living room with this custom R2-D2-themed Xbox 360 console with custom sounds. - Kinect Sensor: The bundle includes the Special Edition custom white sensor. Use the Force and unlock an amazing new world of games and entertainment with Kinect for Xbox 360 where you are the controller. Immerse yourself into the Star Wars universe with full-body gameplay. Watch HD movies and sports on Xbox LIVE* in a whole new way. Say what you want to watch and Xbox 360 with Kinect will find it. Then play, pause, or rewind the action with your voice or a wave of your hand. - Xbox 360 Wireless Controller: The bundle comes with a custom C-3PO-themed Xbox 360 Wireless Controller. - 320GB HDD: Store all of your games, movies and multimedia on the largest hard drive available for Xbox 360. - Xbox 360 Wired Headset: Strategize or trade taunts while playing games, and chat with your friends on Xbox LIVE. - Kinect Adventures game: Float in outer space. Experience the thrill of roaring rapids. Tackle mountaintop obstacle courses. And dive into the deep to explore a leaky underwater observatory—all from your living room. With Kinect Adventures, you are the controller as you jump, dodge, and kick your way through exciting adventures set in a variety of exotic locations.