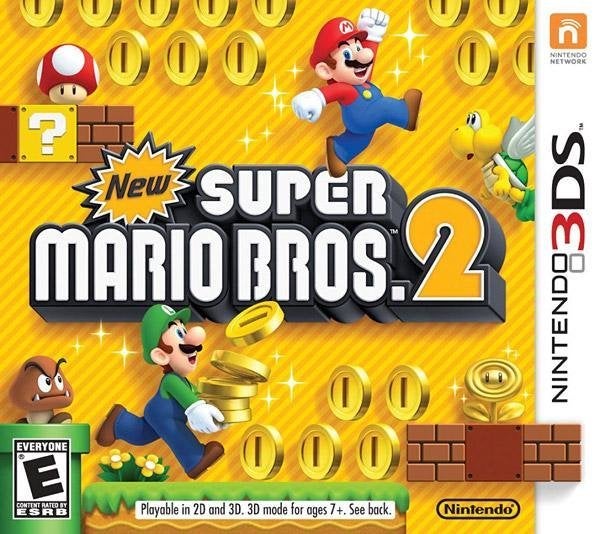 Collecting coins has always been a part of Super Mario Bros. games, but never has it been this fun! In New Super Mario Bros. 2 for Nintendo 3DS, feel the rush as you power through coin-littered levels all while trying to rescue Princess Peach from the clutches of Bowser and the Koopalings in an all-new coin-crazed adventure. The game records all the coins you collect throughout the game, and completing a level is only part of the fun. Chase gold Koopas that leave coin trails in their wake, watch as blocks explode into absurd coin fountains, and transform into Gold Mario for the ultimate in coin carnage, shooting golden fireballs that turn almost anything in your path into coins. In addition, the new Coin Rush mode adds an exciting competitive element as you go for the high score, rushing through 3 levels back-to-back, then challenging friends to beat your score via the StreetPass feature. If cooperation is more your style, team-up with a friend over local wireless* to conquer the main adventure. No matter how you decide to play, New Super Mario Bros. 2 will deliver constant coin thrills, challenges, and surprises that will delight fans new and old. Features: - Run, jump, bounce, and power-up through side-scrolling worlds while defeating new enemies, discovering new secrets, and collecting more coins than ever before. - Every level is filled with golden opportunities - gold rings that turn enemies into valuable gold versions, gold pipes that transport the player to treasure-filled caverns, and blocks that explode into absurd coin fountains. - All-new Gold Mario can shoot gold fireballs, turning enemies and entire sets of blocks into coins!