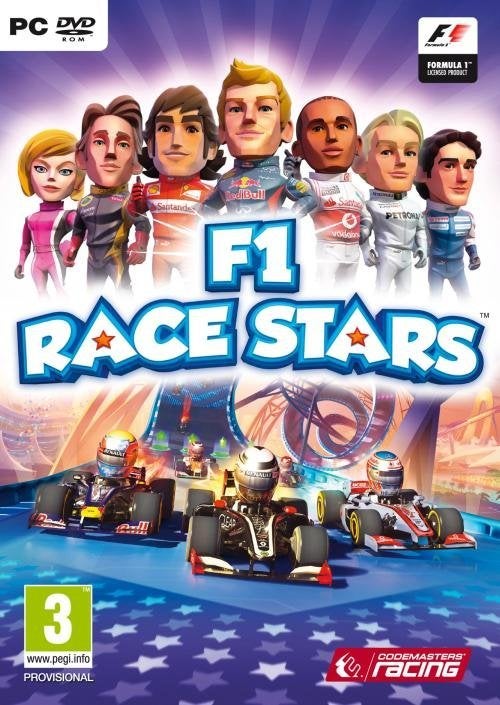 Get ready to experience Formula One cars, teams and circuits like never before with F1 Race Stars. F1 Race Stars will deliver formula fun on every straight, hairpin, jump and loop-the-loop with...
Read more

Get ready to experience Formula One cars, teams and circuits like never before with F1 Race Stars. F1 Race Stars will deliver formula fun on every straight, hairpin, jump and loop-the-loop with super-fast racing and a range of power-ups for players to collect and deploy as they sprint for the chequered flag ahead of their rivals. F1 Race Stars will take players on a world tour of iconic Formula One locations, including Monaco, Silverstone and the new Circuit of Americas in Austin, Texas, recreated as fantastical racing circuits built for speed and wheel-to-wheel competition. Friends and family can share the fun too - F1 Race Stars will deliver 4-player split-screen racing and 12-player competition alongside an extensive career mode featuring a number of Championships. Features: - Formula One Stars as never seen before: In F1 Race Stars, the whole cast of Formula One stars become personality-packed, toonified heroes driving all-new F1 Race Stars cars representing each team from the 2012 FIA Formula One World Championship on a range of super-fast, feature-packed circuits. Codemasters Racing Studios has drawn upon its vast experience in track design and racing AI and let its game designers and artists off the leash to create a fresh new Formula One experience. - It's a formula of fun for all: With instantly accessible pick-up-and-play gameplay, F1 Race Stars will enable players of all ages and abilities to dive straight into position-swapping, wheel-to-wheel competition. With up to 4-players competing in split-screen multiplayer, head-to-head competition or coming together in teams, F1 Race Stars is perfect for sharing the fun with friends and family. Up to 12 players can also race in online multiplayer and by signing up to RaceNet, the free online extension for Codemasters Racing games, players can track their races, rivals and rewards and join in regular F1 Race Starscommunity events.