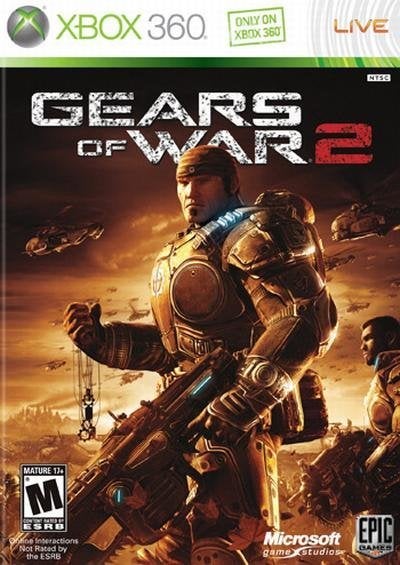 The gears of war continue to turn as Marcus Fenix and his squad of Cogs go back into action in the sequel to Microsoft and developer Epic Games' blockbuster action title. Gears of War 2 continues the...
Read more

The gears of war continue to turn as Marcus Fenix and his squad of Cogs go back into action in the sequel to Microsoft and developer Epic Games' blockbuster action title. Gears of War 2 continues the story of Marcus Fenix and Delta Squad, locked in an increasingly desperate battle against the nightmarish Locust Horde for the survival of humanity. The game promises to be an epic saga of survival, loss, and retribution. Just as Gears of War set the standard for high-definition visuals, Gears of War 2 raises the bar even further with the amazing technological advances of Unreal Engine 3, delivering a bigger, badder, and more intense experience as the story continues. Unparalleled gameplay. “Gears of War 2” takes the award-winning gameplay of the original and improves upon it in every way. The genre-defining cover system is further refined, making the “stop and pop” gameplay more intuitive. Dynamic cover is given new meaning as downed opponents can be picked up and used as shields. The intimate violence of the battlefield is heightened when combatants engage in chainsaw duels. Destructible environments and vicious new finishing moves add to the over-the-top experience. Team up with a friend to fight through the harrowing story of Delta Squad in the enhanced campaign mode, now featuring drop-in/drop-out gameplay, as well as individual player difficulty options. Or recruit four friends to battle in the new game mode “Horde,” where you’ll fight together to fend off a seemingly endless onslaught of Locust forces to attain the highest score. Gears of War 2” features eight distinct multiplayer modes,2 including the new Wingman, Guardian and Submission modes, where up to 10 players choose a side and pit their courage and battlefield mettle directly against others. In addition, multiplayer bots are available to sharpen your skills offline or to fill out your online private matches on Xbox LIVE.