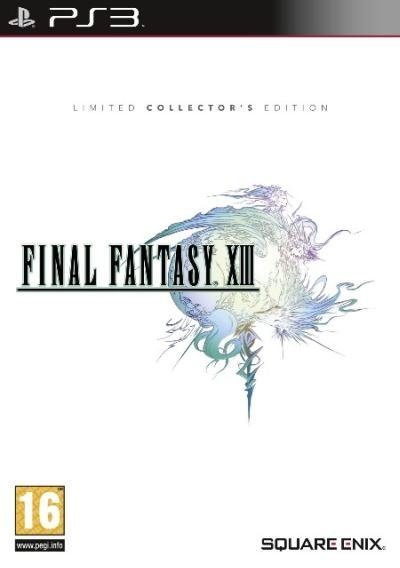 In Final Fantasy XIII, players will embark on a journey through the cityworld of Cocoon and the outerworld of Pulse, encountering and fighting alongside a diverse group of allies. Execute powerful attacks with weapons and magic, and summon the enigmatic Eidolons with an evolved Active Time Battle system. Experience seamless transitions between real-time gameplay and in-game cinematics. Do you have the courage to face your destiny? The Final Fantasy XIII Limited Collector's Edition features a number of bonuses for all of the fans of the franchise. Included is a soundtrack CD (with liner notes by the composer,) an artbook featuring images from the game's production and final release, a set of three art prints featuring the Eidolons, and a collectible "Brand of the l'Cie" decal. Collectors Edition Includes: - Final Fantasy XIII Original Sound Selection: a soundtrack CD including a selection of tunes from the game, especially chosen for this Limited Collector’s Edition by composer Masashi Hamauzu. The CD is presented inside a slipcase featuring artwork from Final Fantasy XIII, with liner notes written by the composer himself. - The World of Final Fantasy XIII: an exclusive hardback book featuring characters artwork, CG rendered images and environments from across the game production. - Exclusive Art Prints: 3 highly collectable art prints showing artwork of the Eidolons, powerful summoned allies of the lead playable characters of Final Fantasy XIII. - Unique 'Brand of the l'Cie' decal: Collectible decal featuring this most iconic symbol from the game storyline.