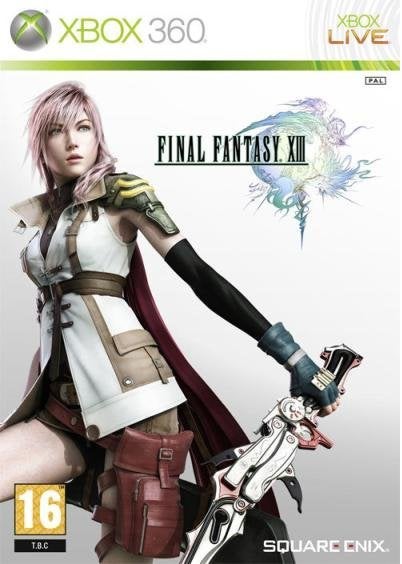 Players will follow Lightning, Snow, and the other heroes who are dealt a hand of fate by the god-like fal'Cie. Cursed and regarded as enemies of society, they have the world against them and nobody to rely on but each other. Will they find the strength within themselves to break free of their curse and determine their own fates, or will they succumb to this higher power? Features: - Take Part in a Gaming Experience that Sets New Standards – The first in the series developed for a simultaneous release on multiple high-definition consoles, FINAL FANTASY XIII pushes new boundaries in cinematic presentation, sound and gameplay. - Experience the Unity of Speed and Strategy with the Ultimate Active Time Battle system – The familiar system has evolved, granting players the freedom of executing numerous commands in a single turn with the multi-slot ATB gauge. Whether inputting singular commands in each slot for consecutive attacks, or expending multiple slots at once to activate a devastating blow, it’s up to the players to respond effectively to the battle conditions at hand. - Adapt to the Ever-Changing Tide of Battle with Paradigms – A brand-new game mechanic enabling players to assign roles to their party members at any time during battle, shifting between combat paradigms. Consisting of various combinations of the game’s six roles, ranging from Commando, the offensive specialist, to Medic, the quintessential healer, paradigms allow players to respond and adapt instantly to any given situation to turn the tide and seize victory. - Witness the Battle Scene Transform with an All-New Summon System – Introducing Gestalt Mode, a powerful dimension of the summon system that elevates the action to a whole new level. In Gestalt Mode, characters and their transformed Eidolons fight as one, dealing massive damage to enemies through simple button commands.