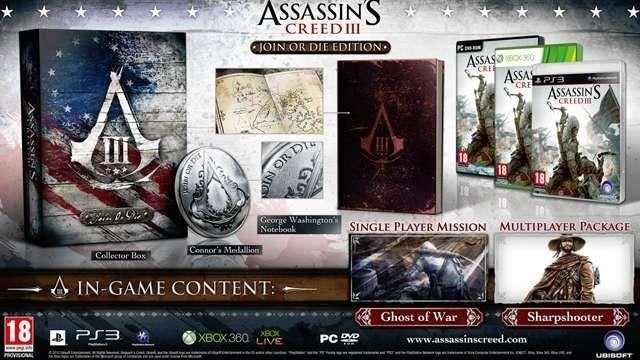 The American Colonies, 1775. It's a time of civil unrest and political upheaval in the Americas. As a Native American assassin fights to protect his land and his people, he will ignite the flames of a young nation's revolution. Assassin's Creed® III takes you back to the American Revolutionary War, but not the one you've read about in history books. The Join or Die Edition: - Join or Die... a single call to action which will determine whether you're ready to fight for freedom or give up and die by an unfair oppression. - Join us and ignite the American Revolution! you'll find an authentic Assassin’s medallion, George Washington's diary, and you'll get access to extra content with additional missions, skills, skins.... This Join or Die Edition includes: - The medallion of the Assassins in a high quality pouch - George Washington's notebook revealing all the truth & secrets about the Assassins and the Templars during the American Revolution. - In-game bonus content: - Single Player Mission: Ghost of War - The tide of the Revolution turns into the Templars favour. Defeat your enemies and unlock The Pontiac’s War Club, a powerful Native American weapon. - The Sharpshooter Multiplayer Package - Unleash the Sharpshooter fury in multiplayer with 1 new character, the Sharpshooter, 1 Relic, 1 Emblem, 1 special Picture and the Title of "The Jester".