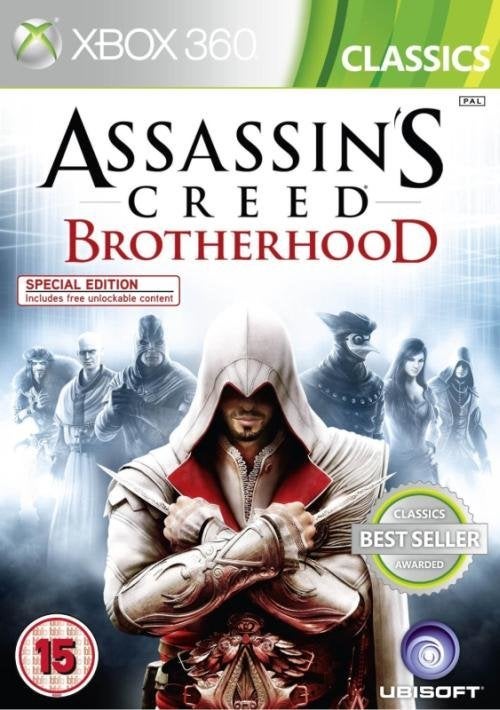 Assassin's Creed: Brotherhood Special Edition Includes: - 2 New Solo Missions: The Aqueducts & The Trajan Market - 2 New Multiplayer Characters: The Harlequin & The Officer - 1 New Armour For Ezio: The Drachen Armour Assassin's Creed: Brotherhood is an epic action game for Xbox 360 set across a blend of present and historical time periods, that places the player in the role of the leader of a Renaissance-era guild of assassins out for vengeance against the remnants of the Knights Templar. Set primarily in Rome, this sequel to the critically acclaimed Assassin's Creed II features returning characters from the previous game and includes new features such as the ability to command members of your guild in combat, a new arsenal of weapons and multiplayer game support in which players can assume different assassin characters. The critically acclaimed single player experience of Assassin's Creed is back and better than ever as Ezio returns in a powerful struggle against the powerful Templar Order. Now a legendary Master Assassin, he must journey to Rome, center of power, greed and corruption to strike at the heart of the enemy. Defeating the corrupt tyrants entrenched there will require not only strength, but leadership, as Ezio commands an entire Brotherhood that will rally to his side. Only by working together can the Assassins defeat their mortal enemies. And for the first time, Assassin's Creed Brotherhood offers a never-before-seen multiplayer layer. Players can help the Templars by using Abstergo to train in the art of Assassination to eliminate the Assassins once and for all. Players can choose from a wide range of unique characters, each with their own signature weapons and assassination techniques, and match their skills against other players from all over the world in different game modes.