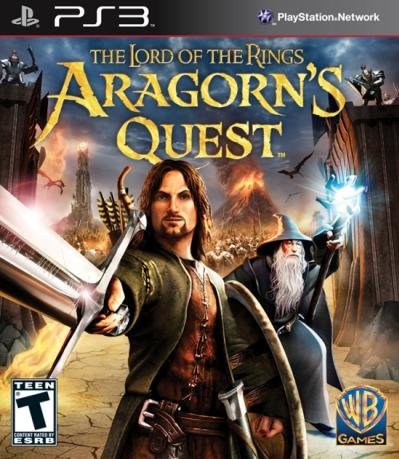 The Lord of the Rings: Aragorn's Quest is the first Lord of the Rings videogame created specifically for kids and their families with accessible gameplay set in a friendly, colorful rendition of Middle-Earth. Players assume the role of Strider and embark on his greatest quests from The Lord of the Rings trilogy. Features: - Extension of the LOTR Universe: Journey through Middle-earth as Aragorn and live out the heroic adventures through The Lord of the Rings trilogy. - Intuitive Motion-Control Gameplay: Take full advantage of the Wii-Remote and Nunchuk for intuitive and immersive motion-control gameplay including swordplay, archery, spears and more - Attack on Horseback: Scatter the enemy and charge down the foes on horseback. While mounted, use your sword and spear to defeat assailants - Easy Co-Op Play: Sophisticated and novice gamers can play together with easy drop-in, drop-out co-op play. Kids, families and friends can work together as Aragorn and Gandalf to share in the experience at any time - Unique Second Player Features: Wield the power of Gandalf to inflict magical attacks upon the minions of Sauron and to restore and protect Aragorn, the Fellowship and goodly forces - Battle Familiar Enemies: Players will encounter and battle fierce creatures from The Lord of the Rings trilogy such as Orcs, Spiders and Ringwraiths - Unleash Special Character Skills: On the battlefield, use Aragorn's Battle Cry to terrify enemies, while strengthening the player and their troops