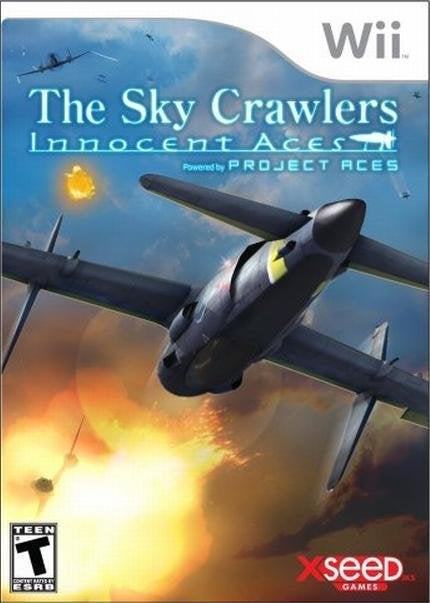 The Sky Crawlers: Innocent Aces is the latest flight simulation game from Project Aces, the development team behind the Ace Combat series. Featuring an engrossing story, action-based flight simulation, aerial combat, and an innovative use of the Nintendo Nunchuk controller which mimics the use of a real-life flight stick, it is a worthy addition to the game libraries of both new and more experienced fans of aerial combat games on the Wii. Key Game Features: - New Aerial Combat Game from the Creators of Ace Combat – Project Aces, the foremost developer of action-based flight simulation games and the team behind the Ace Combat series, brings their expert knowledge of intense aerial combat to Wii. - Innovative Controls Place the Player into the Cockpit – The flight control stick is simulated by the Nunchuk which is tilted to roll, pitch, and yaw, while the Wii Remote is titled up to accelerate and down to decelerate in its role as the throttle. - Beautiful Landscape and Realistic Sound FX – All the minor details of the aerial combatants are visible against a gorgeous landscape, while the realistic sound effects further immerse the player into an actual aerial dogfight. - Deep Story Told Through Animated Cutscenes and In-Game Sequences – A world so depraved that it needs war to thrive, this alternate reality is brought to life with animated cutscenes and voiced in-game sequences during combat. - Additional Controller Configurations – Nintendo's Classic and GameCube controllers are also supported.